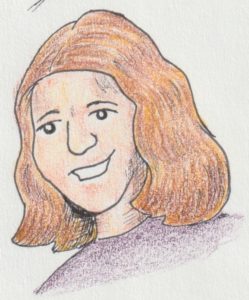 Thanks to a doctor going on vacation, Jan has been an early-riser since being born at the tail end of 1980.

While she didn’t get the VIP treatment of being rushed to another hospital by helicopter (visit Marc’s bio for more on this,) the brown-haired beauty had a much less turbulent childhood. This included winning a gingerbread house, getting a drawing in a Member of Parliament’s calendar and catching an eel while fishing. Although some may call it boring, her future husband would’ve called it “living the dream.” (Again, visit Marc’s bio for more on this.)

Though she insists she’s “ageless” and “never gets old,” Jan admits to being “younger” at one time. The young-at-heart lady grew up as an active middle-child who went camping every summer with her family and relatives. She enjoyed playing outside as much as colouring inside.

An odd introvert, Jan has been in plays, drama clubs and chess clubs— even won a few trophies.

In her spare time, Jan usually paints or writes. Her passion for creating art is extensive. There’s been a few commissioned art pieces, including artwork for a baby’s room, and illustrating a family’s memoir book. Though she never went to art school, her talents were encouraged and honed in school art classes and taking a Graphic Design course. The “hottest modest Goddess,” as she’s been known to refer to herself, doesn’t boast about her accomplishments, but she made an exception for this bio.

So what else has this multi-talented madame done? Helped build a rec room bar, renovate a bathroom and a kitchen, and refinished a trunk and table stand. Learnt basic sign language and medical terminology. Worked as a freelance and full-time graphic designer. Designed business cards, flyers and brochures. Graduated a journalism course, and worked as a freelance newspaper journalist and magazine columnist for a bit. She also wrote several well-received short stories and even a few fanfics for her favourite shows including Shadowhunters, Buffy the Vampire Slayer and Highlander: the Series.

The spectacular storyteller even self published a children’s book a few years back: The story, illustrations and layout were all transferred from Jan’s head to the paper by her own hand. With other projects currently in the works, this drawing dynamo is also hoping to finish them… eventually.

Netflix And Chill (Not In The Dirty Way Though…)

To pay the bills, the sultan of sight continued in customer service. Managing not to strangle customers, she’s also gotten pretty good and been told she should be on the radio. (Hey, podcasting is the next best thing!)

Beyond running her multimedia empire, Jan also carves out time to watch Netflix. Finding it hard to focus on passions due to potential interruptions, the fantastical ‘flixer is well-versed in what the service has to offer. From documentaries to South Korean series and horror to Indian films, Jan’s tastes are as eccentric as her copious amounts of creativity.

More recently, everyone’s favourite sighted-wife who podcasts with her blind husband has begun providing luminations in a whole new way. Taking on the midnight shift for better pay, Jan’s sleep patterns have become erratic at best. Putting her various states of insomnia to good use, she’s also begun posting to Twitter at all hours of the night. (It’s so totally not because she’s patrolling the city as the Guiding Goddess though… that would be crazy!)

Then again, nothing would be surprising for the magnificent midnighter at this point. As Jan herself puts it, “I stopped being surprised a while back. I met Marc in journalism and the rest is history, which you can discover on the podcast.

Though. Who doesn’t love balding blind short men?” (Editor’s note: It’s not balding when you shave off the rest!)

– Despite loving seeing bunnies in the wild (believing it’s good luck), Jan would never want one as a pet.

— Jan’s favourite books series include Underworld by Kelley Armstrong, Mortal Instruments and sequel series by Cassandra Clare, and The Hitchhiker’s Guide To The Galaxy by Douglas Addams.

Back to About Us section

Listen To Our Latest Podisodes!

A fully blind journalist & cool stuff enthusiast. A sighted customer rep & casual artist/author. Together: a couple w/ a podcast about life & laughs. Come for the blindness but stay for the fun!

It’s Labour Day and The Blindnamic Duo are finally back to end the summer in style!

Looking on the bright side of life, Marc and Jan are reminiscing on how The Blind Avenger’s vision-loss has created some unintended mishaps. It’s a podisode featuring ferris wheels, foot stomps and air hockey, so come have a laugh and listen in!

Don’t be a dingleberry: Make your earholes happy by subscribing for free and listening to our latest podisodes as soon as they’re released. You can also search for Blind Luminations wherever great podcasts are found. What are you waiting for?

(Episode art: An image depicts stick figures of Marc wearing sunglasses and Jan as they ride in a ferris wheel. In the cart at the top, Jan asks Marc, “Isn’t this fun?” He responds by yelling “Ayeeeeeeeeeeeee!” Blind Terror is written in big letters above the scene. The sketch was drawn by Marc Rocheleau, who is completely blind. Jan Rocheleau made sure the ferris wheel carts were inside the wheel.)